The MIF program at Berkeley Haas is called MFE ( MASTER OF FINANCIAL ENGINEERING PROGRAM ). Every aspect of the one-year Haas Master of Financial Engineering Program leads to student career destinations. Haas MIF Class Profile brings together diverse students with different goals in its portfolio. Classroom instruction delivers the financial engineering knowledge and best practices students will put to use in the experiential learning that forms the heart of the program. That starts with a 12-week internship and continues with an applied finance project. Both of these experiences put students at the top of the queue when applying for jobs after graduation. Scroll down for further information on Haas MIF Average GMAT, Haas MIF Class Profile, Haas MIF Application process, employment report, Haas  MIF fees, Haas MIF Application Essay and more.

The Berkeley Haas Master of Financial Engineering curriculum is as dynamic as the finance industry itself. Faculty members contribute to, and share, pioneering research. A committee of leading industry practitioners advises the program director on current trends and future needs. At Berkeley Haas, students master the theories and frameworks underlying today’s complex financial markets and gain insights into how they play out in the real world—through applied projects and an internship. Haas Master in Finance program demands 90 percentile in the quantitative section of GMAT/GRE.

The Haas Master of Financial Engineering is for people who want to work in a complex environment: ambitious, disruptive future leaders who want to focus on systemic thinking.

A fast-changing world needs a new kind of leader, who can find creative, entrepreneurial solutions to complex problems. Haas Master of Financial Engineering programme will help you to master the hard knowledge, the soft skills and the adaptable mindset you need to be that leader.

The Internship/Special Topics in Finance project is a required condition for graduation. The internship or approved, on-site project takes place from mid-October to mid-January. Because of the school's reputation and close ties to the best firms, Haas has an exceptional record of helping students secure internships, consistently placing 100% of students each year.

With the Morgan Stanley Applied Finance Project, students apply their newly acquired quant skills, tools, and techniques to solve a real-world challenge. This brings all of  knowledge to bear, while building both students résumé and network. Students form a four-member teams and choose their own topics, with the guidance of Eric Reiner. Much like a final thesis, the teams write and present papers on their chosen topics. The project may be done for three credits, with the winning three-credit project earning a $5,000 Morgan Stanley Applied Finance Project award. 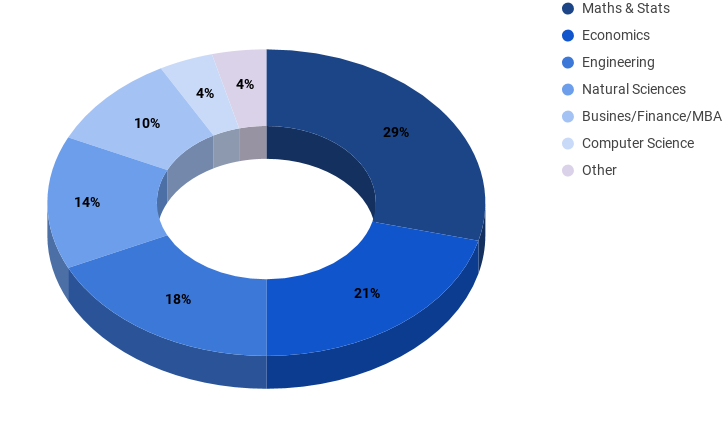 You will find Berkeley Haas and UC Berkeley grads everywhere innovation and big data play a role—in finance, technology, health care, engineering, and science. Haas has an alumni network of 41,000 people with 1100 alumni in Haas Master of Financial Engineering program.

The Chengchun “Arthur” Qi Book Scholarship for $1,000 was developed in memory of Arthur, a student in the MFE program, who passed away unexpectedly in February 2012. The scholarship application is available online each year.

This fund, launched in 2015, was developed in memory of Kate who was an MFE alumna from the Class of 2014. Kate was an extraordinary and selfless human being.

Haas participates in Federal Loans for US citizens and permanent residents. Due to the non-traditional academic calendar of the Haas Master in Finance Program, students will need to go through the loan process twice for Federal Loans (once for the Spring & Summer terms, and once for the Fall & Winter terms).

Haas also participate in private loan programs for those that feel they may get a better rate than the federal loans or for international students that have a U.S. cosigner.

If you are an international student without a U.S. cosigner you may be able to borrow up to $60,000 from a risk-share loan that does not require a cosigner.

If you currently own your own home it is possible to take out a Home Equity Line of Credit (HELOC) to cover your tuition costs. Because there is collateral on this loan, namely your home, it’s possible to get a low-interest rate depending on your credit. The benefit is a lower interest rate; however, this loan will go into full repayment almost immediately.

A 529 Plan is an education savings plan operated by a state or educational institution designed to help families set aside funds for future college costs. There is no age limit for this savings plan. 529 Plans can be used to meet the costs of qualified colleges nationwide. In most plans, your choice of school is not affected by the state your 529 savings plan is from. You can be an NC resident, invest in a VT plan, and send your student to college in CA. Check to see if your institution is eligible under the 529 rules. Almost every state has a 529 plan available.

Personal Loan From a Family Member or a Friend

You may have a family member or a friend that has an opportunity to help you by loaning you money directly. It is important to keep the loan as professional as you can to avoid any misunderstandings. It is recommended that you both agree and create a Master Promissory Note so everyone is clear on the terms and conditions of this loan. There are websites that can assist in creating a Master Promissory Note. www.lawdepot.com and www.rocketlawyer.com are just a couple that was found when typing “Master Promissory Note” in a search engine.

Give us an example of a situation in which you displayed leadership? (500 words maximum)

One of the most difficult situations I have ever had face during my tenure as VP of my company was the decision whether to fire Jane, an experienced employee, who I had worked with closely for two years. The decision arrived at my desk after a new CEO was appointed, and I became his VP, in charge of most employees. Together, we decided that we were going to transform our small and quiet company into a leading research firm with a target of 50% sales growth over the next 2 years. For that, we needed a devoted team that was committed to this goal.

This vision did not fit Jane. She left a large corporation where she worked long hours, and one of the main reasons she chose to join us was the laid back and relaxed atmosphere of a small company- exactly what we were determined to change. Although talented, she did only the minimum necessary and was not willing to make any sacrifices and commit to our goal.

I faced a tough decision. On the one hand, firing a talented and experienced employee, in a time when most of the employees were new (as we wanted to drive growth we recruited new people), seemed unwise. In addition, I knew that our relationships with major clients might get hurt and a substantial knowledge base would be lost the other hand, not firing her would mean establishing double standards for our employees – most were required to work hard, whereas Jane was leaving early and refused to contribute extra efforts. Her opposition to the change had already begun creating undesired effects, as a few of the employees resented her.

In order to solve the problem, I tried to make Jane relate to the new goals and change her attitude. In addition, we also improved the company’s bonus program, based also on her comments, in order to reward the extra efforts. When all milder measures failed, I had to make a decision. I decided to fire Jane. Although I knew that in the short run things would be difficult, I concluded there was no other way. I needed the most dedicated team possible, a team who was personally committed to the growth of the company. Jane, as head of a major division, would have undermined this effort in the long run.

Personally, making the decision was very hard. It meant firing someone with whom I had worked with closely for a long time. However, In terms of team spirit, matters improved greatly, and we succeeded in building the right team to lead the company forward. The new division head that replaced Jane was a highly motivated manager, and with her I had a team that could reach the ambitious goals we set, and indeed, in two years we have doubled the company’s project capacity, with a great improvement of research quality and customer satisfaction.

Tell us a six-word story that reflects a memorable experience in your life to date.Elaborate on why it is meaningful to you?(250 words)

I found my calling in the middle of a crisis – the Bangalore Riots of 2016. On my way home from meetings for my telemedicine startup, I was blocked by an angry mob that had set fire to a bus. Having just returned from Australia, I was deeply pained by not being able to move freely in my own country. Soon a curfew was imposed, and the city came to a standstill. The stranded thousands were in need of supplies and medical help, but with the city on lockdown, were unable to get it. I opened an emergency medical line through my startup, but its reach was limited. I learnt through social media that there were others in my position – with resources to offer but nowhere to direct them.

I couldn’t shake the realization that in a world where we are leveraging technology to solve every problem, we hadn’t yet used it to organize the flow of goods and human resources during disasters, which have affected 1.7 billion people in last decade!

Following the riots, I founded Operation Resilience, a first-of-its-kind national platform designed to crowd-source and streamline $1.2 billion in disaster-relief supply-chain. After much endeavor, I managed to win support of the Ministry of Home Affairs, various NGOs, and startups. Recognized by India’s Government as a “Top 10 Innovation in Disaster Management,” the self-sustaining platform is set to become operational by February 2018.

Haas Master of Financial Engineering interviews, since they are conducted by alumni, tend to be slightly friendlier than interviews conducted by the admissions committee. Nonetheless, the interviewer is still trying to gauge how solid your motivations for wanting to pursue finance are, how interested you seem in the Haas program, and if you fit well with the program’s famous defining principles.

Interviewers often ask many standard course-related interview questions, as well as questions designed to test how well you handle diversity and conflict. You can also expect numerous follow-up questions. If you are able to interview on-campus, however, there is a high chance your interview will take place with a second-year student. If you’re interviewing off-campus, you will most likely interview with an alumnus.

In certain rare cases, you may be asked to interview with an alumnus via Skype if the school is unable to find enough available interviewers in your area. The interview will last for 45-60 minutes. The Haas Master in Finance interview is blind, meaning the alumni interviewer will only have access to your CV. 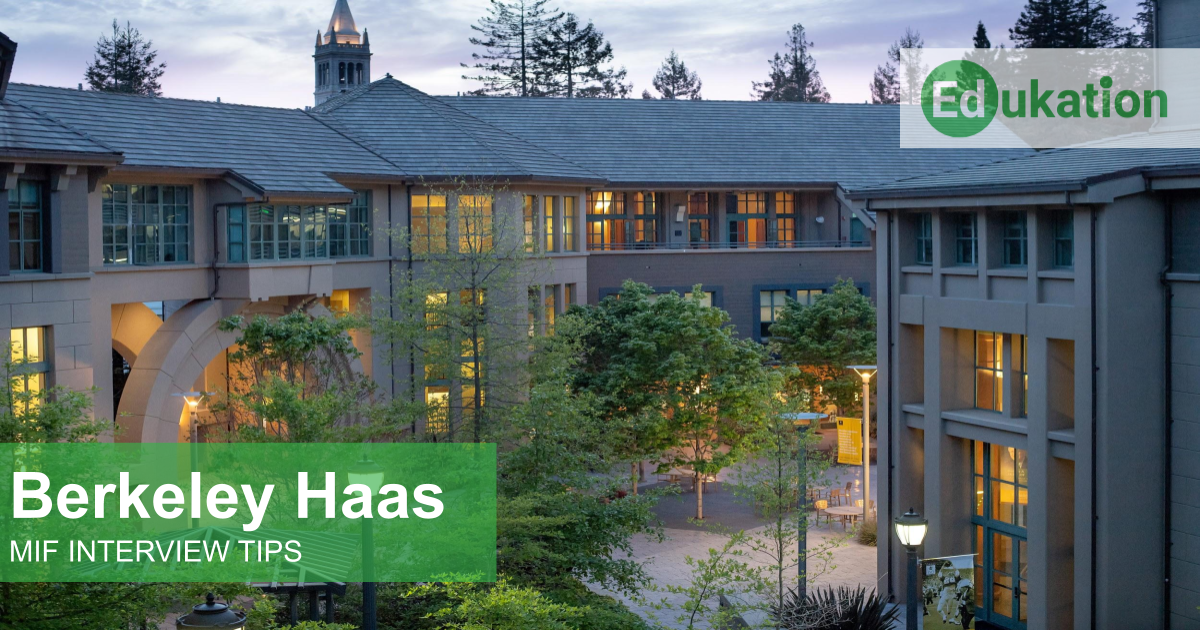